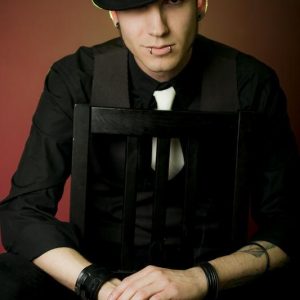 No love – just lies. In the blink of an eye, an explosion decays, eclipsed by the rhythm of a march; a raging inferno dwindles to ember before igniting again. AAESTHETIC PERFECTION’s new single, “Love like lies,” contemplates the perils of passion and the menace of ambition. Delivering his signature, multifaceted style, Daniel Graves stitches together industrial, trap, and dark pop in an imaginative new step forward for AESTHETIC PERFECTION.

AESTHETIC PERFECTION is the solo project of Los Angeles-based producer Daniel Graves. Over a career spanning 15 years, five full-length-albums, and numerous singles and music videos, Graves has reinvented what it means to be a dark electro artist, combining industrial, pop, goth, and everything inbetween. AESTHETIC PERFECTION defies definitions in a world that demands them.

Solar Fake is a German Electro act, formed in 2007 by Sven Friedrich (Zeraphine, Ex- Dreadful Shadows). Their latest album "Another Manic Episode" was released in October 2015 and hit the German album charts (billboard) at #31!

In November the band participated in "Gothic Meets Klassik" where their songs were performed together with the symphonic orchestra of Zielona Gora at Gewandhaus Leipzig.

"My God finally. FINALLY. Get a taste of this decay. [This] is one of those you'll be hearing more about. NYXX carries herself well, and the cover [of the album] should give you every indication what to expect: excellent vocal carry with a biting sense of reality. ...watch what this girl does."
-DeafSparrow.com

Her name is inspired by the Greek goddess of night. Growing and cultivating in the shadows of Los Angeles, NYXX is the powerhouse idol the music world has been summoning. A professional photographer and visual artist, NYXX is bringing authenticity and consciousness to pop music. Self-described as “goth pop,” NYXX delivers the darker side of glitz with a biting, decayed EBM and industrial influence. She is self-produced, self-taught, and unstoppable.
“Britney Spears meets Nine Inch Nails.”
“A female Rob Zombie.”

However you describe her, NYXX is intriguing, new, and exciting. Bewitching audiences with innate and truly unique vocal performances, she has entered the pop scene through the creepy back alley. Backed by a Kickstarter campaign, NYXX self-released her debut EP, Nightmare, in April 2016. She is currently writing with numerous artists, as well as continuing to collaborate with AESTHETIC PERFECTION’s Daniel Graves.
This summer marks the commencement of the underworld take over.