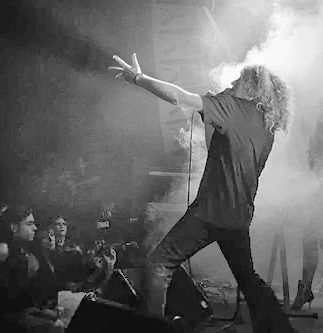 SNOG (Metropolis Records, Psy-Harmonics)
Formed in 1988 in Melbourne, Australia, Snog is a primarily the work of musician David Thrussell, with frequent guest musicians. Musically, they are a fusion of many styles--including industrial, techno, ambient, experimental, even sometimes including country and funk. Lyrically, Snog has strong themes of nihilism, anti-capitalism, anti-fascism, anti-consumerism, individuality and anti-big-brotherism.
The band name is a reference to "kissing and cuddling," which, according to Thrussell, symbolizes the Marxist concept of destroying barriers between people.

THE LABRYNTH
THE LABRYNTH is an electronic music project from Michael Wimer and Sarah Stewart based out of Seattle Washington.

We are big fans of the Do-It-Yourself aesthetic, prefering to do our own photo editing, video editing, music production and engineering. Their debut full length album called "Expanding/Contracting" came out in December 2015.

FINITE AUTOMATA (Latex Records / Beyond Therapy Records)
They’ve been referred to as a welcome throwback to the harsher, heavier aesthetic of mid 80 - mid 90’s electro-industrial. However the group does not to limit itself, and forges a fresh reconciliation of the new school with the old. Bizarre and sometimes fatalistic stage antics, combined with driving yet dancable rhythms solidify the group's observational approach to the fallacy of human nature. To date, Finite Automata released their EP release Here Won No One (2011), their first full length album Recurse (2012), and Second Circle (2015); the first release off their current creation entitled Dogma Eye,is tentatively slated to be released later this year.

ECTOPROXY (Venus Aeon Records)
EctoProxy is an other-worldly synthesis of intense musical styles and textures, that ensnares its listeners, enveloping them in a dark, sonic realm, where their innermost musings become material and animate. Prose prophet, DÅMI∆N (vocals, guitar, programming) and sample sorceress, ZµµL (live samples, synth) manifested the EctoProxy in 2014 in an effort to combine industrial machines, thrashing guitars, haunting synthesizers, dirty rap beats, and penetrating lyricism, to create a sound of alchemical perfection. In 2015, DÅMI∆N and ZµµL encountered dimension splitter, CBZL (synth, guitar, vocals), and decided to work together, to insert their creation into the worlds of Witch House, Electronica, and Rock, where it could have the most impact. EctoProxy has a voice uniquely it’s own. EctoProxy is an answer to a question yet unasked. EctoProxy is coming. Quickly making waves in their local scene, they've opened for bands such as; Prayers, Genitorturers, & The March Violets.